I've been on a bit of a civil defense kick lately (you'll see why in a few weeks if all goes well), and as part of that I ran across an odd little book called Total Atomic Defense from 1952, by one Sylvian G. Kendall.   Kendall was a former Army colonel who served in the US expedition to Siberia after World War I, itself a rather odd and regrettably forgotten (at least in the US) episode in history.   His only previous writing experience seems to have been an account of the expedition published in 1945.   TAD is part of a subgenre of works I like to call "atomic exhortations", about What Should We Do About the Bomb.   However, unlike most exhortations published around this time, Kendall doesn't have much use for the UN, world government, or disarmament treaties, which were the other exhorters' preferred solutions.   No, Kendall takes a very different view: his book is about how to survive the Bomb, not about how to get rid of it.   His preferred solution, though, isn't bomb shelters, which he sees as a classic example of refighting the last war.   Kendall was an advocate of dispersal. 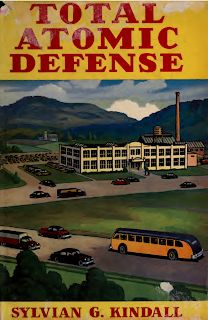 Figure 1: Total Atomic Defense Cover
(Public Domain)
The idea, essentially, was to suburbify the entire country.   Call it Atomic Sprawl.   If you can't keep the A-bombs from hitting, then instead eliminate the targets, tear down the cities, shift everyone out to the countryside, dilute the urban areas until there's no target worth the price of a bomb.   Kendall wasn't the only dispersal advocate, not by a long shot; in fact he seems to be a bit late to the game, since most other dispersal advocates I'm aware of had gotten bored with the subject by 1950.   I haven't studied this in detail yet, but most dispersal advocates I've read seem to have been either people who hated cities and wanted to do this when the Bomb was still science fiction, or were advocates of world government and were trying to make a point about the horrible world we would create if we didn't ban the bomb.   I get the feeling Kendall falls into the former camp; he says dispersal will be "the best jobs of slum clearance [the cities] have ever done. Furthermore, the expanded cities will have a better chance to combat crime and corruption by destroying the roots of their evil” - that is, high-density areas that mix business and residence, which is evidently the wellspring of wickedness.

After the obligatory science lesson - which includes a fairly ridiculous mistake (he thinks atomic energy is a sort of battery) - Kendall gets down to business.   His plan was that all cities would establish "Factory Zones" on the outskirts of town, with each building distant enough from the city and from each other that a single bomb could only destroy a single complex.   Between the Factory Zone and the town center would be a "Relocation Area".   Widely separated six-lane arterial highways would be built between the factories and the former town core, flanked by drive-in businesses.   Two-lane dead-end streets would come off of the highways leading to park-like areas, with one-way, one-lane lanes and loops coming off the two-lanes leading to the actual residences.   Each residence would have a minimum of two acres of land.

Industrial establishments would be forced by law to move to the Factory Zone.   Kendall feels actually forcing individuals to move would be dictatorial and unconscionable, but residents of the city core would be given subsidies to move their houses - and I mean move the houses, which is a new technology he's keen on - to the new lots in the Relocation Area.   The goal is to ensure a maximum population density of 1,000 people for square mile.   Cities in the "Area of Utter Destruction" - by which he means the densely populated areas of New York, Massachusetts, Rhodes Island, Connecticut, and New Jersey - lack the free space to expand into, so their citizens would be induced to move elsewhere by laws mandating the relocation of industry out of the New England area, the population naturally following of its own accord.

But that's not all.   Enemy A-bombs would also be targeted on dams, causing devastation downstream. To prevent this, all existing dams over a certain size must be torn down, replaced with dams too small to cause serious destruction.   Flood control will instead be provided by canalization, and irrigation by pumps and pipes.   To keep the enemy (never specified by name) from burning down our forests and farms with "incendiary paper", we must switch to the use of strip farming, build fire lines, and reintroduce the beaver on a large scale.   We must stockpile metals and other raw materials, and move Washington, D. C. to a more secure site in the current Rocky Mountain National Park, with each building of the new city widely separated to minimize blast damage and equipped with underground chambers to continue operations under atomic attack.   The only mention of cost in all this is a suggestion Congress allocate $15 billion ($128 billion today) for cities to buy the land needed for the Factory Zone and Relocation Areas - which he assures us will also indirectly pay for the expansion of sewage and transport infrastructure, once the cities resell that land to its newly dispersed inhabitants.

Kendall's calculations - questionable in themselves - are all based on assuming the unnamed enemy is dropping 20-kiloton bombs costing $50 million ($426 million today) each.   By this point the AEC had already developed much larger and much, much cheaper bombs, and was on the verge of detonating the first megaton-range hydrogen bomb; his ideas were obsolete before they were proposed.   But he had no way of knowing that because that was all still deeply classified.   And there's barely a mention of fallout and lingering radiation, which didn't really enter public perception in a big way until the CASTLE BRAVO disaster of 1954.

But the book doesn't just cover civil defense.   Kendall also goes on long, rambling digressions about the need to feed cattle on grass instead of corn (which he assures us will bring back the 25 cent steak) and the folly of the Philippine defense plan in WW2 (it "will probably be written into history as the greatest military mistake ever made anywhere, at any time, during 3,000 years of recorded warfare.”)   He spends an entire chapter on a "Perpetual Homestead" plan, a proposal to have the federal government buy up large tracts of land and sell them off as small homesteads of less than 320 acres, which would be non-transferrable except back to the government.   At no point does he explain what this has to do with civil defense - possibly it's an attempt to convince people to move back to the countryside from the city?   Or maybe he just likes the idea.

All in all, it's a very strange little book.   It's public domain now so you can read it here yourself if you're so inclined.