It is the (semi-)official policy of the National Oceanic and Atmospheric Administration that we should not try to nuke hurricanes.   (No, seriously, it is.)

We were not always so unambitious.

A Creative Use for Decommissioned Submarines

While doing research for a future article, I ran into something interesting: in the early 60s, the US Naval Civil Engineering Laboratory studied converting decommissioned World War II submarines into bomb shelters.

Rock to Hide Me

Rock to Hide Me: Herman Kahn, Civil Defense, and the Manhattan Shelter Study

“One can almost hear the President saying to his advisors, 'How can I go to war – almost all American cities will be destroyed?' And the answer ought to be, in essence, 'That's not entirely fatal, we've built some spares.'” -Herman Kahn[K]

Note on Notation
The value of the dollar has been different from year to year. In each case, unless otherwise specified, values will be given in the amount for the year in question, followed in parentheses by the equivalent value in 2012 dollars. Equivalent values are calculated using The Inflation Calculator.

The Early Years of Civil Defense
In December of 1950, President Harry S Truman announced the formation of the Federal Civil Defense Administration (FCDA). With UN forces falling back before the Chinese onslaught in Korea, world war – nuclear war – seemed imminent. The FCDA's mission was to protect American citizens if that war should come.

The crisis receded; the UN forces threw the Chinese back and the war settled into a long stalemate. But the larger threat of the Soviet Union remained, and the possibility of a surprise attack – a bolt from the blue, an atomic Pearl Harbor – was an almost universal fear, a fear the FCDA was supposed to deal with.

Truman's FCDA proposed to protect citizens with a network of government-built bomb shelters. But, with the stalemating of the war in Korea, Congress refused to allocate funds to actually build any shelters, and the whole concept of public shelters was abandoned with the arrival of the Eisenhower administration and the hydrogen bomb in 1952. The enormous power of the H-bomb – a hundred to a thousand times greater than the bombs dropped on Japan – led to a seemingly inescapable conclusion: the cities were doomed. Bomb shelters were pointless; they simply could not be made strong enough to survive, not for a price Congress or the fiscally conservative Eisenhower administration were willing to pay.

Eisenhower FCDA administrator Val Peterson argued instead that the only defense was “not to be there” when the bomb went off. When the Distant Early Warning RADAR stations spotted an incoming attack, every city in the nation would empty, the population moving en masse by bus and private car to receiving areas in the countryside in the few hours before the bombers arrived. Evacuating millions of people in a few hours was a mind-boggling logistical task – and, sooner or later, intercontinental rockets arcing over the North Pole would reduce those hours to thirty minutes.

Then, in 1954, a US nuclear test in the Pacific overshot its projected yield. CASTLE BRAVO spread radioactive contamination a hundred miles downwind, sickened dozens of Japanese fishermen and Marshallese islanders, and made horrifically clear that distance alone would not protect the evacuees. Fallout from high-yield nuclear surface-bursts would make large areas lethally radioactive for days or weeks. Even if the cities were successfully evacuated, the evacuees would still have to be provided with shelters.[Bl][Mc]

By 1956, Val Peterson had changed his mind and asked President Eisenhower for $32.4 billion ($270 billion) to build public blast and fallout shelters. President Eisenhower responded by appointing a committee, commonly called the Gaither Committee after its chairman, to study not just Peterson's proposal, but the whole question of civil defense. At the committee's first meeting in August 1956, he set them a simple question: “If you make the assumption that there is going to be a nuclear war, what should I do?” The committee soon expanded its mandate to cover all aspects of this question, reviewing the United States' entire defense policy, but civil defense remained a core issue.[Bl][Ka][Gh]

The FCDA and the Gaither Committee were not the only people thinking about how to protect the civilian population. With civil defense policy in flux, a new voice entered the debate – a young, roly-poly nuclear strategist named Herman Kahn. In 1956, a member of Kahn's civil defense group at the RAND think-tank proposed a radical new solution to the problem.[Gh] There would not be time to flee to the countryside – but, if city-dwellers could not escape horizontally, perhaps they could escape vertically.

A vast network of deep underground tunnels and dormitories could be built under every major urban area in the country. When warning came, every man, woman, and child would descend 800 feet into the earth, deep enough to survive a direct hit by a high-yield nuclear weapon. There they would remain for three months until the radiation in the city's ruins dropped to safe levels. The project would be preposterously expensive, requiring excavation and construction on a titanic scale – engineering commensurate to the scale of the problem it was intended to solve. But its inventors believed it could ensure the survival of 86% of the American people, even in the face of all-out thermonuclear war. 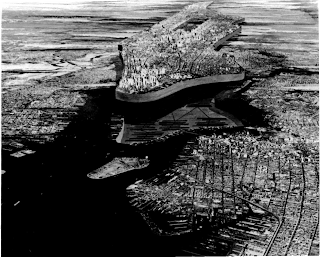