With Special Thanks to Anthony Casendino

In 1959, the Cornell College of Architecture launched a study to design a city that could survive nuclear attack. In the view of Prof. Fredrick W. Edmondson, existing cities were ill-suited to the demands of the Cold War, and he proposed to design from whole cloth a new alternative, better adapted to the rigors of the nuclear age. The Schoharie Valley Townsite project was one of the most ambitious civil defense proposals of the Cold War: a factory-town that could not only withstand nuclear attack, but maintain war production even as the hydrogen bombs burst around it.

The study was staffed primarily by students, senior undergraduates in the architecture program and first-year graduate students in the planning department, with Professor Edmondson acting as the faculty advisor. Edmondson had graduated from Cornell in 1937, then won a prestigious Prix de Rome fellowship. By 1944 he was back at Cornell as the director of the Landscape Architecture program. Besides teaching, he also acted as an architecture and planning consultant, and in the 1950s helped select the site for the new capitol of Brazil. He seems to have had a personal interest in civil defense, judging by his continued participation in civil defense conferences after the project was over. 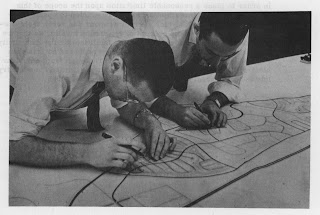 For most of his students, though, the study was just schoolwork. According to one, Anthony Casendino, most of the undergraduates “just saw this as a way to interact with some of the graduate planners and to not do the [undergraduate] subthesis.” In an interview with journalist Tom Vanderbilt, another student, M. Perry Chapman, recalled that “most of us took it for granted that it was just part of trying to introduce some unconventionality – at least in the physical context of the planning.”

Besides his students, Edmondson recruited an array of public and private organizations to assist: the New York State Civil Defense Commission, the federal Office of Civil and Defense Mobilization, the RAND Corporation, IBM, the state Department of Commerce, the Office of the New York State Geologist, the Buffalo Forge company, US Naval Air Reserve Station Floyd Bennet, and ninety individuals from groups like the Atomic Energy Commission and the Naval Radiological Defense Laboratory. The American Machine and Foundry corporation and the Ford Foundation provided financial support. 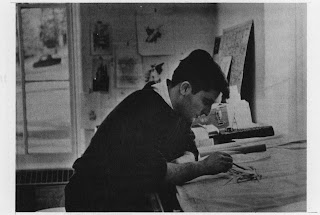 The students were initially divided into seven research teams, who began by studying “basic design criteria” for two weeks. As a baseline, they decided to design the town to withstand a 20 megaton blast at a distance of ten miles from city center, and to then maintain industrial production while buttoned up against fallout.

The next step was to choose a location in New York state for their new town. Based on local geology, the availability of transport, and being outside the blast radius of existing cities, they narrowed the choice to either the Schoharie Valley or Slaterville. Edmondson then divided the class again, this time into four teams, two for each candidate site, to prepare preliminary proposals. The Schoharie site won the competition, and the group moved on to the design phase. 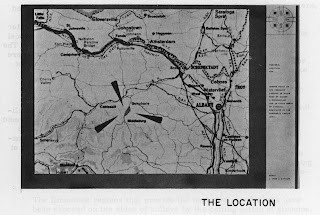 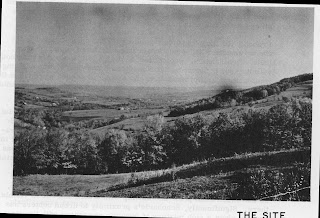 Figure 4: Schoharie Valley in 1959
The Design

The Schoharie Townsite was explicitly modeled after the factory towns of the IBM corporation, and centered around the “EMF”, or Electronics Manufacturing Facility. Based on existing IBM factory-towns, they estimated a population of 9,000, of whom about 1,500 would work at the EMF itself.

The students rejected a completely subterranean design as both too expensive and too depressing to live in. Instead, they decided to build the town on the surface, with underground communal shelters for each neighborhood linked by tunnels. Since the different shelters were all connected, in an attack people could head for cover immediately, without worrying about being cut off from family members in different shelters. Every point on the surface would be within 1500 feet – about five minutes walk – from a shelter entrance. All underground space would be buried beneath at least four and a half feet of earth and a foot of concrete for blast protection and radiation attenuation.

The 9,000 residents would live in 1,158 apartments, 372 rowhouse and duplex units, and 951 detached houses, split among three main residential areas. Each residential area would be centered around a community center with an elementary school, shops, social center, churches, communal recreation areas, and a park. The entrances to the neighborhood shelter would be in the elementary schools. Each entrance would include mass decontamination stations, able to handle 60-75 people per hour. 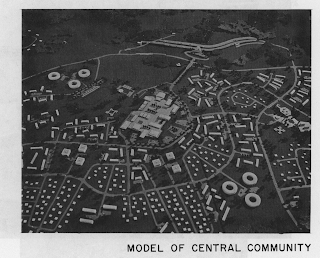 Figure 5: Model of the Community

At the center of the three residential areas would be a central business hub with a high school, municipal buildings, stadium, and shops. The town high school would sit on top of the downtown shelter, which would also be the hub of the subterranean network. The municipal offices' basements would be hardened and serve as the town's civil defense control center. 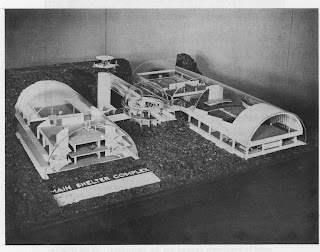 Unlike the rest of the town, the Electronics Manufacturing Facility would be entirely underground, in limestone one hundred feet below the surface. The access tunnel would have a series of turns to dilute blast, and the internal structures would be shock-mounted. The student planners saw the subterranean character of the factory as a bonus – “by virtue of its subterranean character, the plant inflicts no objectionable atmosphere upon adjacent residential areas, so that usual difficulties in industry-residence relationships should not arise.” 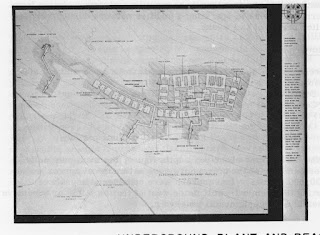 The town would get its water from underground wells, with an underground treatment plant and million-gallon subterranean reservoir in the rock above the EMF, and three other million-gallon reservoirs located elsewhere. A small light water reactor would supply the electrical power.

All of the underground spaces would serve secondary roles in peacetime. The rooms of the high school shelter would be used a gymnasium, library, auditorium, cafeteria, and storage facilities. The underground tunnels would hold a “seatway” transportation network, a sort of minimalist subway: “trains” of eight to ten chairs would be pulled along by a continuously moving belt, briefly disengaging from the belt at stations to allow passengers to get on or off. 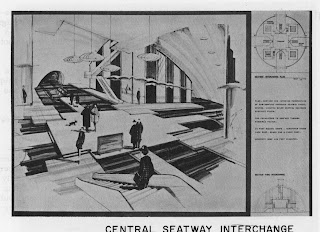 The shelters would be stocked with collapsible furniture that would occupy little volume when not in use. Two types were designed for the study: the “Family Tree”, a network of telescoping poles that could be used to hang hammocks, and curtains for privacy, and the “Versibed”, a rectangular frame that could be attached to a variety of surfaces. 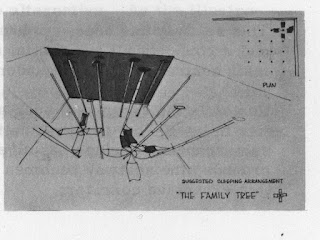 The study concluded with a brief narrative of a family in the Schoharie Valley Townsite the day the air raid sirens wail: Jim, Isabel, and Jimmy Curran. Jim is working at the factory, Jimmy is at school, and Isabel – this being 1959 – is baking a pie. When they hear the siren, they all naturally rush into the shelters. Isabel and Jimmy are reunited, while Jim – a civil defense officer – reports to the CD control center. Over the next day, Isabel and Jimmy help erect “Family Trees”, while Jim performs unspecified civil defense work. No mention is made of an actual enemy attack in this episode; the story has the air of an extended rehearsal. In retrospect, perhaps that's intentional.

Edmondson's students presented the finalized plans and detailed models at a UN auditorium in April of 1960, and Cornell printed the study as a pamphlet. The project received some press attention, though nothing exceptional. As far as I have been able to learn, while many of the students participating went on to successful careers, none maintained an interest in civil defense.

While the students may have seen the project as just a school project, Edmondson seems to have taken it more seriously. At a design conference a year later, he presented a proposal for a 150,000-person partially underground city called “NEUS”, which would serve as an “executive center” for the American northeast. He claimed that, since the city would be extremely compact and mostly underground, it would take up “only a few hundred acres, ousting one good size dairy farm.” He decried existing cities as obsolete: “Born by geography but grown by the technology of Eli Whitney, they are reacting weakly to the surgical concept of renewal. The prognosis is poor. The old arteries are collapsed, the organs of social and mechanical functions are diseased and intravenous feeding of Federal, State, and private finance simply extends disability payments for a few more years.”

In some ways, the Schoharie Valley Townsite study was published at the perfect time. Just a year and a half later, President John F. Kennedy would call for a national civil defense effort, setting off a brief but intense wave of interest, still visible in the rusting black-and-yellow fallout shelter signs decorating municipal buildings throughout America. But the civil defenders of the Kennedy era had no interest in building new cities. Instead, they chose smaller, simpler, cheaper solutions: encouraging private shelter construction, finding and stocking existing rooms that could be used as shelters, etc.

And, in retrospect, while there is a certain Buck Rogers-ish appeal to the idea of a nuke-proof city, that was probably the right choice.

Previously published in the Journal of Civil Defense, the magazine of The American Civil Defense Association.