I have recently acquired a collection of documents on the General Electric Aircraft Nuclear Propulsion (GE-ANP) program, an ill-fated 1950s effort to build a nuclear-powered airplane.   Someday I'm going to write an entire TMMAM - or a book - about the project, but here's the short version: the project was initiated in 1946 as NEPA, Nuclear Energy for Propulsion of Aircraft, a feasibility study run by Fairchild.   Despite the skepticism of many in the atomic science community, NEPA, along with an independent review board called the Lexington Project, concluded an A-plane was feasible.   In the early 50s NEPA was phased out and replaced by ANP, a joint USAF-AEC effort to develop such a plane.

There were two main contractors, GE and Pratt & Whitney, each with a different approach.   GE focused on developing a direct-cycle engine in which air from the turbojet would pass directly through a reactor to produce thrust.   Pratt & Whitney aimed to develop an indirect-cycle engine, in which a liquid-metal coolant would carry heat from the reactor to a heat exchanger in the turbojet.   Most of the information I've found so far relates to the GE effort, which got quite a bit further, including running several atomic-powered turbojets in static tests.   Pratt & Whitney, among other things, developed a reactor design that would eventually evolve into the Molten Salt Reactor, better known today as the Liquid Fluoride Thorium Reactor.

The project, after many ups and downs, was eventually shuttered in 1961 for a variety of reasons.   When the program was shut down GE produced a series of 21 comprehensive technical reports, detailing every phase of the project, as a sort of cheat sheet in case the government ever decided to reactivate the project.   What I've acquired is two of those reports and two-thirds of a third: APEX-901, Project Summary; APEX-910, Application Studies; and Parts B & C of APEX-908, the XNJ140E nuclear turbojet, the final incarnation of the system.   I've gotten these through the "adopt-a-doc" system, so two of them are already available on the Department of Energy's Information Bridge server (APEX-901, APEX-908C), and the other two should show up tomorrow.   Be warned: these are big pdfs!

So what's in these documents?   Let's take a look!


I'm going to focus here on the more visually appealing stuff.   There's a lot of interesting material on the history of the project, but I want to wait until I can do a full and proper history of ANP before delving into that.   Right now I'm just going to post some of the pretty pictures.   This is all taken from the first half of APEX-901.

ANP studied more than just nuclear turbojets.   The infamous PLUTO nuclear-powered cruise missile is a progeny of ANP.   Another application that was examined was nuclear rocketry.   NEPA had first studied nuclear rockets back in the 40s, but the GE-ANP studies began in 1954, initially focusing on a nuclear-powered version of the Atlas ICBM:

The nuclear rocket engine uses hydrogen propellant, a graphite-moderated core, and had a claimed thrust of 300,000 lbsf.   Nuclear-powered ICBMs are generally considered a bad idea, and not just for the obvious reasons.   Nuclear thermal rockets have a poor thrust-to-weight ratio, which is a problem for something trying to reach outer space from the Earth's surface.   Particularly odd is that the missile is two-stage, and the first stage is nuclear-powered, while the second stage has a conventional rocket engine.   A nuclear rocket might make some sense as an upper stage, firing once you're out of the atmosphere, but it's a decidedly odd choice for a lower stage.   Presumably there's a reason for this, but darned if I know what it is.   Incidentally, I've seen references elsewhere to a Soviet study of a nuclear-powered ICBM, called the YaRD, but all of the source material seems to be in Russian.

Around this time GE-ANP also studied a nuclear-powered reconnaissance drone, called the ACA-8: 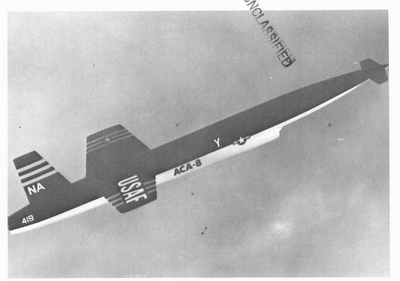 Unlike its more famous cousin, PLUTO, this was a turbojet-powered missile armed with a camera instead of bombs, and potentially capable of hitting Mach 2 at 40,000 ft on nuclear heat alone, or Mach 2.5 at 60,000 ft with chemical augmentation.   Later on they also looked into retrofitting Snark cruise missiles with nuclear engines, but I don't have a picture of that. 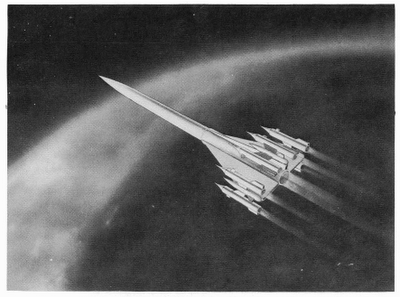 The main core module is a nuclear thermal rocket for space propulsion: 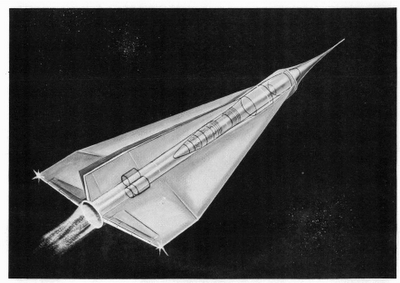 While in orbit around the Earth, expendable propellant tanks and "auxiliary atmosphere-breathing turbo-ramjet units" would be attached: 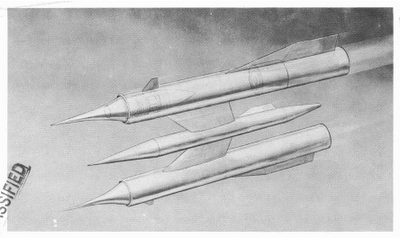 They would then travel to a distant planet, where the turbo-ramjet booster would detach to explore the planet before returning to the main ship.   There aren't many details besides the pictures, unfortunately.   It's not clear how much work was even done on the concept - given that GE-ANP's main job was building a nuclear-powered bomber, I suspect not much.