So, last time I talked about some of the stuff from APEX-901.   I didn't get through APEX-901 last time, but the remaining stuff to talk about also appears in APEX-910: Application Studies, which is what I'm going to talk about today.   Before I do, though, four more APEX reports have popped up on Information Bridge:

(Oddly, I ordered the first two from the DoE, which is why they were uploaded, but I don't know where APEX-918 or -919 came from.   It wasn't there the last time I searched Infobridge for ANP stuff.)

The Applications Studies report is a collection of ideas examined by GE-ANP, other than their main missions.   What their main mission was varied over the course of the project due to the vagaries of Washington politics, but the upshot is the report does not include any information on the Convair NX-2 or CAMAL.   It does have some interesting stuff, however. 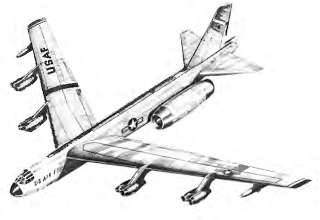 Another item discussed in this section is the Circulating Fuel Reactor, studied in 1953:

The Circulating Fuel Reactor was a concept for a nuclear reactor that would use a liquid fuel instead of solid fuel rods.   Heat would be carried from the reactor to a heat exchanger in the turbojets by molten sodium coolant.   What makes this odd - well, aside from the obvious - is that, previously, my understanding was that the CFR was primarily a project of the Pratt & Whitney company in conjunction with the Oak Ridge laboratory.

Now, ORNL seems to have come up with the CFR by themselves, and this GE study took place in 1953.   Which is the same year Pratt & Whitney joined forces with Oak Ridge on the CFR.   So my guess is that it was offered to both companies but that GE decided to pass.   Their development program had the strength of simplicity compared to something with as much plumbing as the CFR.   P&W, on the other hand, were previously working primarily on a supercritical water-cooled reactor - basically trying to cram a souped-up submarine propulsion reactor into an airplane.   So it makes sense they'd be more interested in this than GE.   Incidentally, as I mentioned in the post on APEX-901, the CFR ultimately evolved into the Molten Salt Reactor, the descendant of the Liquid Fluoride Thorium Reactor.

We also have one of the most bizarre items to ever come out of ANP: a nuclear-powered helicopter.

Apparently this study was performed by the Aircraft Division of the Hughes Tool Company in 1959 under a subcontract.   It never even got to the point of issuing concept art, and for very good reason.   The study concluded that, for a 100,000-lb. helicopter, the payload-to-weight ratio could be, at most, 11.5%, with a dose rate at 50' of 25 rem per hour.   In modern units that's about 250 mSv, and translates under the LNT model to a 2.5% increase in your lifetime cancer risk for every hour of exposure.   Even by the standards of the 50s, that is a lot of radiation.   Decreasing the radiation dose to 2.5 rads per hour - still an enormous amount by modern standards - made the shield so heavy that the helicopter could carry no payload.

The nuclear-powered aircraft studies almost all assumed the plane would use a "divided shield" concept, designed to protect the crew but minimize shielding in other directions.   For an airplane they could get away with that, since several thousand feet of air makes an excellent supplemental radiation shield.   For a helicopter, which is going to be hovering near the ground under power, you really can't do that; you need to use a "unit shield", shielding in all directions, which is much, much heavier.   (Before anyone suggests it, while you can slack a little on the top, you can't leave it out; otherwise you get gamma radiation reflected back down by air molecules.)