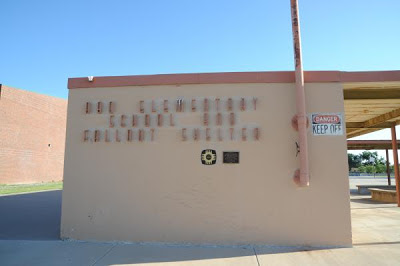 For those who don't want to squint, it says "Abo Elementary School and Fallout Shelter."   It's a school built entirely underground - that building just holds the stairs.

Abo was built in 1962 in the town of Artesia, New Mexico.   Ground was broken for the school on June 12 1961 and the first students arrived in August of 1962 - just in time for the Cuban Missile Crisis two months later.   Artesia lay within a hundred miles of an Atlas missile complex, a B-52 base, and the White Sands Proving Grounds, all of which would likely be hammered in a war with the Soviets, and before the school was built there had been no public fallout shelters in town.   By building the school underground, it would protect not just the 540 children studying there, but also up to 1,860 other people who might use it as a shelter.   The decision to go underground was no doubt helped by the Office of Civil Defense's offer to pay for the additional cost of subterranean construction - $134,067 out of the $469,847 price tag.   The OCD apparently hoped Abo would inspire other communities to build similar structures.[Ne][Lo][NNP] 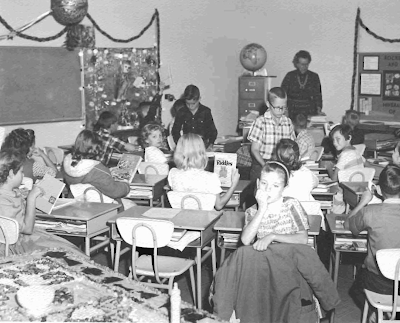 The school was built by cut-and-cover methods - essentially an enormous basement, but with 15 inches of reinforced concrete above it instead of a building, and a playground built atop the roof.   Three windowless blockhouses held stairs leading to the school itself, with 1,800 pound blast doors to seal off the outside once the shelter reached its designated 2,400 occupants.   Other features included a two week food supply, a pair of deep wells for water, a 150 kW electric generator, air filters, decontamination showers, a chapel, and a dual-purpose room that could be converted into a morgue.

The architect, Frank Standhart, a civil defense advocate and designer of two previous windowless but aboveground schools for Artesia, claimed it could withstand a 20-megaton blast 10 miles away, then remain buttoned-up until fallout died to safe levels.   Besides offering shelter in an atomic cataclysm, the underground construction and lack of windows also reduced maintenance and air conditioning costs.[Ne][OCD][Lo]   Standhart was also later involved in abortive plans to build an underground high school near Roswell, New Mexico, as well as an underground shopping mall, the "Del Norte Sheltered Shopping Center", also near Roswell.   A membership, available for $250, would get you one of the proposed 8,000 spaces in the facility.   But the developers, Max Littell and L. W. McGuffin, evidently never reached the 2,500 subscriptions they wanted to have before starting construction.[Is] 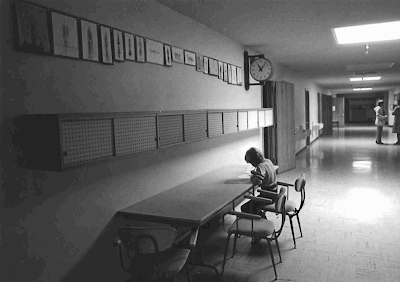 The school was moderately famous at the time - Dan Rather did a report on Abo for the CBS Evening News in 1962, and the school's dedication was attended by Assistant Secretary of Defense Steuart Pittman, bearing a congratulatory message from President Kennedy.   Over 60,000 people toured the school in the two or three years after it was built.[NNP]   According to press reports of the time, reaction to the school was mostly positive within the community.   The teachers reportedly liked the lack of windows; one, Mrs. Gertrude McCaw, said the students "are simply less rambunctious.   You spend more time teaching and less time disciplining."   Another, Lester Vaughan, said, "I asked to be transferred from another Artesia school to Abo.   I wanted the unique experience and opportunity to work in the nation's first underground school."[Ne][SJ]   The children were also mostly favorable - apparently the air conditioning was a big hit - although concerned about the implications of learning in a fallout shelter:

Russ Baldwin, 4th grade: "You get your brain cooled off down here.   It runs better when it's cool...   You think a lot about the danger while you're here.   Sometimes I have the feeling that fallout is coming now - that it is out there now - and then I go out and it isn't."

Andy Ashton, 5th grade: "I like it because we go to the only underground school in the world."

Martha Terpening, 6th grade: "What I'm afraid of is that my mother is a teacher and she would be safe, but my daddy works at the post office and he wouldn't have any place to go."

Rusty Heckel, age 9: "Being underground gives you a funny feeling - but you know you're safe."[Ne]

One is free to wonder if press reports might not be an unbiased source of information on the children's views, of course.   And some outsiders condemned the project.   The National Council on Schoolhouse Construction averred that "shelter provisions are not compatible with educational requirements",[Ne] although it's not clear from the source if they're referring to Abo specifically or to other proposals that were floating about at the time.   A Moscow newspaper, Trud (in English, Labor), was even less pleased, describing at as a product of "nuclear madness" and urging the Artesians to "remember that they are not only spoiling the physical health of the pupils but are also damaging their mental health by indoctrinating them with the idea of inevitability of war."   Dr. Frank Lutz of the OCD invited the Russian author to tour Abo before making up his mind, but as far as I know the offer was never taken up.[NNP] 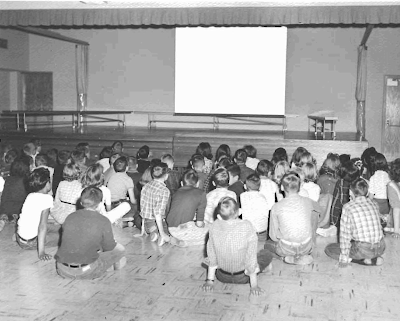 A study was done in 1972 on the psychological effect of going to school underground.   Unfortunately, I haven't been able to get hold of the study, but according to the abstract "there is no evidence that the fact that it is underground and could serve as a fallout shelter and is so marked, designated and named has had any detrimental affect on pupils attending that school. Apparently other schools could be so constructed and if operated under similar conditions would also serve as effective elementary schools."   A recent internet survey of former Abo students mostly produced memories of tornado drills and the awkwardness of an underground building during a power outage - as well as a few mentions of realizing that one classroom would have served dual duty as a morgue.[NNP]

Abo isn't the only underground school in the country - there are others in Virginia, California, New Mexico, Washington, D. C., and probably others I don't know about.   It is, however, the only one I know of intended for use as a fallout shelter; the others were sited underground for more mundane reasons like energy conservation.[Ha]

The school remained in use until 1995, when it was replaced with a new, above-ground replacement next to it.   It is now used as storage space, and has been designated a National Historic Landmark.[Ha]   You can check it out on Google Street View here.

Works Cited:
Note: there's some disagreement in the sources about some of the precise numbers (capacity, thickness of the roof).   When two sources disagreed, I used the government figure.

As per the requirements for use of [CLUI], the text of this article is licensed under an Attribution-Noncommercial-Share Alike 3.0 Creative Commons License.   This applies to the text only, as some pictures are used with permission and may be copyrighted by others, and it does not apply to any other material on this site unless otherwise specified.