In the summer of 1969, the US Army Corps of Engineers' Nuclear Cratering Group visited the island of Hawaii.

The Nuclear Cratering Group (NCG) was the Corps of Engineers' contribution to the Atomic Energy Commission's Plowshare project.   Plowshare was the AEC's infamous attempt to find peaceful uses for the hydrogen bomb.   Although Plowshare belonged to the AEC, the Corps was also deeply involved in the program after 1962 as a potential customer for the AEC's technology.   In particular, the NCG conducted a series of experiments investigating the cratering process, using enormous piles of conventional high explosives to mimic the effects of nuclear bombs.   Between 1962 and 1969 the NCG conducted eight series of high explosive cratering experiments in Nevada, Idaho, and Montana.[Bu]

Because the NCG experiments did not use actual hydrogen bombs, they were free of the restrictions placed on the AEC's nuclear tests.   In particular, the AEC had enormous difficulty obtaining permission to conduct nuclear tests outside of the Nevada Test Site.   But the alluvium of the NTS was very different from the sort of rocks Plowshare would encounter if it was ever actually used in the field.   One of the most promising uses for nuclear excavation was digging artificial harbors, and most coastlines bore little geological resemblance to the barren deserts of Nevada.

But where the Atomic Energy Commission could not go, the Nuclear Cratering Group could.

In 1968, the Congress of the United States authorized the construction of a small-boat harbor near the village of Kawaihae by the Army Corps of Engineers.[EB]   At some point over the next year, the Nuclear Cratering Group, working with Lawrence Livermore Laboratory, turned the project into a combination public works program and experiment: the Corps would excavate the harbor, not with dredges, but with 120 tons of aluminized ammonium nitrate - enough explosive to give a glimpse of what would happen if the same task was undertaken with a nuclear bomb.   The plan was given the name Project TUGBOAT.[Da] 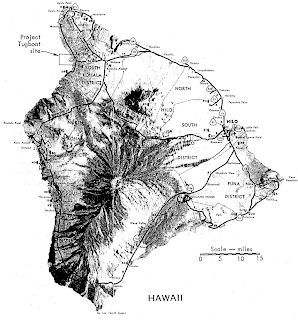 An NCG team visited the site over the summer of 1969 to collect preliminary information, including ecological and archeological surveys.   Several heiaus were located in the area; wood bracing was installed in them to prevent any damage from the blast.   Phase I of the project, consisting of five test blasts of between one and ten tons each, was conducted from November 4th through 7th 1969 to calibrate instruments and determine the safe limit for blasting.[Da]

Phase II followed in spring of 1970.   A jack-up floating platform with a bucket augur drilled twelve holes in the shallow water off the coast of the island, to a depth of 48 feet below the surface of the water. 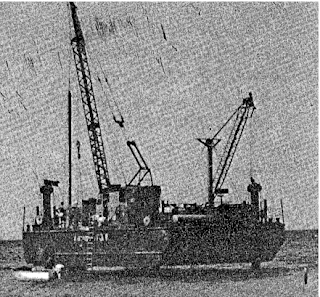 Metal canisters 5.1 feet wide and 11.3 feet tall were placed in the holes and the drill hole stemmed, leaving a four-inch fill line.   Each canister was then pumped full of 10 tons of aluminized ammonium nitrate slurry.

The first four shots were detonated on April 23rd.[Da] 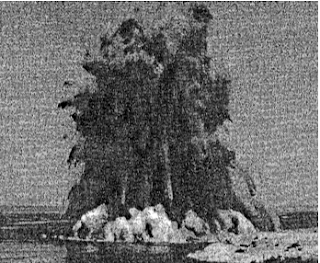 Figure 3: One of the TUGBOAT Blasts[Da]
(US Government)

The remaining eight shots followed over the next two weeks, with the last two on May 8th.   Three of the shots misfired as a result of inadequate boostering.   Charges C and D did not fully detonate, while charge G burned instead of exploding - the sea above the charge reportedly "frothed and boiled for almost 90 minutes after the detonation."   Sixteen additional smaller charges, of just half a ton each, were fired on December 8th to finish the job.   The breakwater for the new harbor was already in place by the time the remedial shots were set off.[Da] 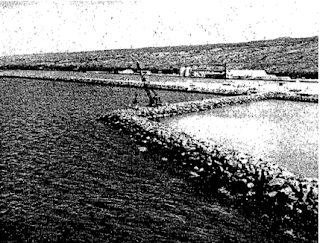 Figure 4: Building the Breakwater[Da]
(US Government) 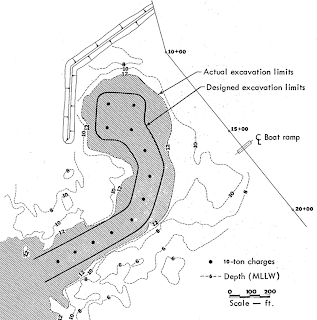 Except for the misfire of the three charges, the project was by all reports a complete success.   No damage to nearby property or archeological sites was reported; the blasts were gentle enough that the bracing was not even needed.   Extensive data was collected on cratering in coral - the explosives were actually more effective than anticipated.   The Kawaihae Small Boat Harbor is still in public use today. 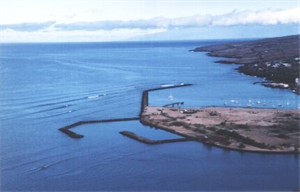