Neutrons, besides being one of the building blocks of matter, are also an essential tool in many scientific experiments.   And the most cost-effective source of neutrons is a nuclear reactor.

In a research reactor, neutrons are produced by uranium fission; some are used to sustain the chain reaction while the rest are leaked onto an experimental target.   Various tricks can be used to maximize the neutron production of a reactor but, beyond that, if you need more neutrons than a given reactor can provide, you build a bigger reactor.   But some experiments depend instead on the neutron flux - the neutron density in volume times time.   Increasing a reactor's power increases the total number of neutrons produced, but if the size of the reactor also increases then the flux remains the same, since the neutrons are spread out over a larger volume.   A higher neutron flux requires not just more power, but a higher power density in the reactor core.

Power density is limited by cooling.   Fission produces heat as well as neutrons, and if the reactor produces more heat than the cooling system can remove, the fuel rods melt.   This is generally considered a design flaw.   A higher flux can be produced by "pulsing" the reactor - running it at very high power, then shutting down to allow the cooling system to catch up - but this can only produce a high flux for a brief period at a time.

Los Alamos scientists in the late 60s wanted to go beyond the limits of conventional research reactors.   Neutron flux is limited because heat cannot be removed quickly enough from the fuel.   But what if, instead, they removed the fuel from the heat?

In the Liquid-Jet Super-Flux Reactor (LJSFR), a fluid fuel would be pumped into the reactor, then, after fissioning, be pumped rapidly back out.   By cooling the fuel outside of the reactor vessel, a power density - and therefore neutron flux - far beyond conventional reactors could be achieved. 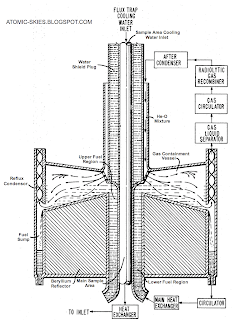 The LJSFR would be fueled by highly-enriched uranyl sulfate dissolved in water (although more exotic fuels - such as molten salts or even liquid metals - were also considered).   The reactor would be a 21-cm-wide vertical cylinder, surrounded by a beryllium reflector and leading to a deflector.   An 8.2-cm-wide tube would stand in the middle of the reactor containing the experimental target.   Fuel would enter the reactor from the bottom at high speed, fission, and exit from the top at 200 degrees Celsius.   It would then splatter on the deflector and be collected and cooled in a containment vessel, mixing in the process with helium and oxygen to remove entrained radiolytic hydrogen and oxygen and fission gases, and then returned to the reactor for a second go-around.

L. D. P. King of Los Alamos, the reactor's inventor, described it as a jet engine that produced neutrons instead of carbon dioxide, and predicted a 500 MWth LJSFR could achieve a neutron flux of 1017 neutrons per cm2sec - about 20 times the best conventional steady-state reactor available at the time.   However, for the moment King favored building a smaller, 25 MWth reactor in the abandoned UHTREX building - among other issues, Los Alamos, located in the New Mexican desert, would have difficulty finding enough water to cool such a large machine.[K2][K3]   The 25 MWth KING reactor would also incorporate a gamma-ray irradiation facility, exploiting the very short-lived, gamma-emitting fission products produced by the reactor.

The LJSFR, quickly renamed the Kinetic Intense Neutron Generator (KING - get it?), was a radical new concept, but it was based largely on technology that had already been developed.   Reactors using aqueous fuel solutions had been quite popular in the 1950s; their fuel was easy to reprocess and they were easy to control since, if the reaction ran too fast, the fuel would heat up and expand, increasing the neutron leakage and slowing the reactor back down again.   By the time KING was proposed in 1968 aqueous reactors had fallen out of favor, in large part due to corrosion issues, but the low operating temperature planned for KING made corrosion a minor concern.

KING was an evolution of an earlier concept, the Liquid Excursion Pulsed Reactor (LEPR), which was first proposed in 1967.   Instead of a continuous stream, LEPR used discrete "slugs" of liquid fuel, shot into the reaction chamber by a piston.[K1] King spent the late 60s working on fuel development for LEPR, using a laser to test how aqueous uranyl sulfate reacted to rapid heating.   King was preparing to test fuel samples in the Livermore Super Kukla Burst Reactor in December of 1970[NCS], but unfortunately the Department of Energy appears to have cut off access to my go-to document database due to the government shutdown, so I've been unable to track down exactly what happened to LEPR after 1970.

As a first step towards KING, Los Alamos built a small-scale prototype, dubbed KINGLET, at the Parajito testing station, on the high desert mesa near the laboratory.   KINGLET would produce up to 2 MWth, although only for brief periods at a time.   KINGLET was particularly intended to determine stability of the nuclear reaction: most of the delayed neutron precursors would be swept out of the core before they could decay, which raised potential control problems.[WP]

Figure 2: KINGLET Building[WP]
KINGLET is in metal building on left;
building on right is control station
(US Government) 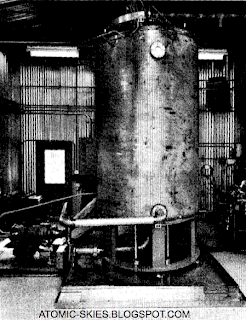 KINGLET first started up on June 9th 1973.   Experiments focused on how different conditions such as flow rate effected reactivity.   Although the reactor behaved roughly as predicted at low flow rates, at high flow rates there was an unexpected loss of reactivity, attributed to gas bubbles becoming entrained in the fuel solution.   To prevent this a deflector was installed to reduce fuel splashing, and 1,000 ping-pong balls added to the fuel to dampen frothing motions.[WP] 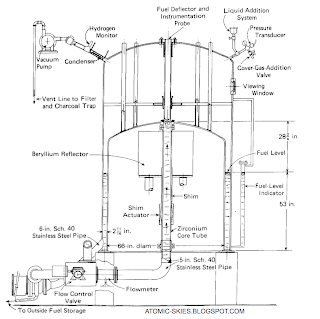 KINGLET operated until August of 1974, when funding was pulled.[Pa][WP]   Although I have not found a record of the specific reason for cancellation, it's not hard to guess why.   The mid-1970s were not a good time for Los Alamos and the other atomic energy labs.   The Atomic Energy Commission was transforming into the Energy Research and Development Administration and then the Department of Energy, with budget cuts to match.   The civilian nuclear industry suffered severe losses due to massive cost overruns on the reactors built in the "Great Bandwagon Market".   And, on some subconscious level, nuclear energy just wasn't cool anymore.   KING doesn't seem to have ever been a high priority for the labs, and in a chaotic budget environment it ended up getting the axe.