On August 9th, 1957, a team of Russian scientists brought a prototype reactor of a radical new kind to criticality. This reactor was fueled by gaseous uranium hexafluoride – the first gas-fueled reactor ever built.[KDG]

The reactor core was a steel cylinder 2.5 meters wide. The scientists stacked over a ton of beryllium blocks in the center of the cylinder in a heap 1.16 meters tall and 1.08 meters wide, with the remaining space filled with graphite. 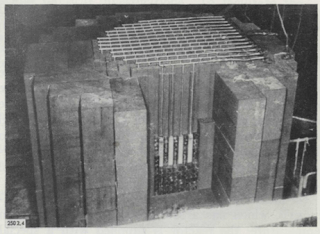 They ran aluminum tubes through holes in the blocks, which they filled with 213 liters, or about 3.3 kg, of 90%-enriched uranium hexafluoride at 1.3 atmospheres pressure. Uranium hexafluoride – abbreviated UF6 – is a solid at room temperature, so to keep it from solidifying they included an electric heater and surrounded the tank with asbestos for insulation. 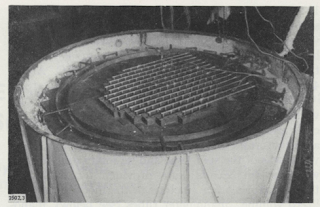 Two steel rods filled with boron carbide could be inserted into the tank to act as control rods, and the pipes were connected with quick-release valves to a second 100-liter tank held at vacuum – in an emergency the valves would be opened, sucking enough of the fuel gas out of the core to terminate the chain reaction. 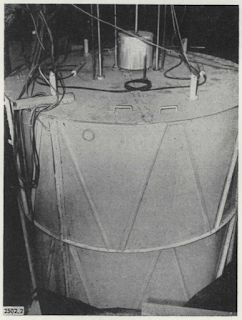 The core produced 1.5 kWth at maximum power – it could actually generate more, but running it any hotter would produce more radiation than the shielding could cope with.[KDG][DVT] 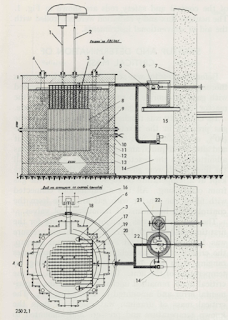 
The Russians revealed their reactor to the world at a UN conference in Geneva in 1958. They don't actually say why they built the thing, but based on later work by the same authors, it was most likely intended as a prototype for a power producing reactor.[DVT] US scientists also investigated gaseous-fuel reactors, and even built a few prototypes, but most of the American work was aimed at reactors to power nuclear thermal rockets – another project I need to write an article on someday. For a nuclear rocket, a gas-fueled reactor makes a lot of sense if you can manage to make it work - which, unfortunately, is a big if.   The efficiency of a rocket is determined primarily by the temperature of the exhaust, which in a nuclear rocket is limited by how hot you let your fuel elements get. The gas-core nuclear rocket, or “nuclear lightbulb”, could get very hot indeed, but technical problems and the scaling-back of nuclear propulsion research in the US ultimately killed the project.

As a power reactor, though, I'm skeptical.  A gas-fueled power reactor would have some advantages. First, the reactor would run on UF6 straight from the enrichment plant, without needing to fabricate it into fuel rods. Second, it would be very easy to control: if the reactor starts to run out of control, the fuel gas heats up and expands, which causes the atoms of fuel to move farther apart, which slows the reaction down. Third, it could incorporate online reprocessing, continuously extracting the fission product “ash” and topping off the fuel without shutting the core down. Fourth, for added safety it could use a dump tank: the core could be connected to a secondary tank held in vacuum; if the reactor ran into trouble the valves would then be opened, sucking the fuel gas out of the core and damping the reaction.[KDG] 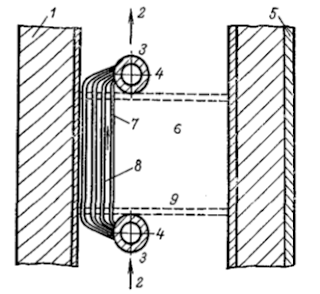 Second, UF6 decomposes into uranium pentafluoride (UF5) and lower fluorines when it collides with high-energy fission fragments produced by the nuclear reaction. UF5 is a solid at the temperatures in question, and would precipitate onto the reactor wall, with unpredictable but probably bad consequences for the stability of the chain reaction. To prevent this, the Russians added chlorine trifluoride (ClF3) to the fuel gas as a fluorinating agent. ClF3 is infamous for being an oxidizer so powerful it will ignite asbestos.[KDG] So you can see why I'm skeptical.

A gas core does have one really big potential advantage that a liquid core doesn't: it can use a number of exotic thermal cycles to extract the energy.   Two members of the Russian team later published a paper proposing a gas-core reactor using an MHD generator: 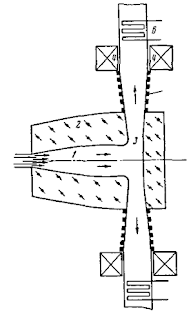 A reactor using an MHD generator could be much more efficient then a reactor using a steam or gas turbine - existing steam turbine reactors turn only about 30% of their heat output into electricity, while proposed gas turbine designs could reach 35% to 45% efficiency.   The MHD reactor could, at least on paper, reach 62% efficiency - perhaps even more with a combined cycle approach.   But to make it work, they would also need the fuel gas to be hotter than 4000 K.   To keep the walls from melting, they planned a rather Rube Goldbergian arrangement where a lower-temperature insulation fluid would flow between the fuel gas and the reactor walls, keeping them from touching. [DZ]   I'm not an engineer, but this all seems... Questionable.

In any event, one of the team members - V. A. Dmitrievskii - thought well enough of the concept to keep doing experiments and publishing papers throughout the 1960s and early '70s.  I haven't been able to find anything out about Dmitrievskii personally - not even his first name - but he was evidently quite taken with the idea, as he published at least five papers on the idea after the initial Geneva report. Most of the work seems to have focused on the chemistry of the fuel gas. As early as 1960, he and a colleague, A. I. Migachev, showed experimentally that they could make the UF6 refluorinate without the need for chlorine trifluoride by adding fluorine gas and running the reactor hotter.[DM][DM2]   Later, Dmitrievskii and a team built a reactor simulator to test the use of UF6 as a working fluid in a turbine, using an electric heater in place of the reactor. [DBV] 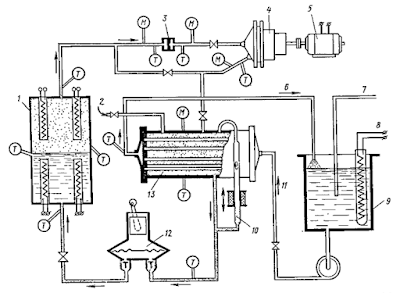 After 1972, though, there's nothing more that I can find. Maybe Dmitrievskii died or retired? Maybe the Russian government decided to redirect research funding into more conventional directions? Or, maybe work continued, but they stopped publishing it in journals that were translated into English. Whatever happened, they didn't talk about it in any English language source that I could find.

[DZ]: Dmitrievskii, V. A., and Zaklyaz'minskii, L. A.   "Induction Magnetohydrodynamic Generator with a Hollow Nuclear Reactor."   Teplofizika Vysokikh Temperatur, published in US as High Temperature, Vol. 9 No. 2 (March-April 1971), pp. 366-372.