An atomic-powered tank is a terrible idea. But that's never kept people from trying.

You may have noticed the "part 1" in the title of this post.   This wasn't the only nuclear-powered tank project - there were at least three others.   As far as I can tell from secondary sources, two of them were about as detailed as this one - that is, basically napkin sketches - but one was a serious research effort.   I'm still working on getting hold of the sources, so it may be a long time before part 2, but I'll do my best.

Detroit Arsenal was the first factory to mass produce tanks in the United States. In the 1950s, they started holding a series of conferences on tank design, because, and I quote: "There was an expressed concern over the cost, weight, complexity, and reliability of new tank automotive material.   At the same time there were doubts expressed over whether there were any new ideas in this field."   Well, if they were looking for new ideas, they certainly got them.

The TV-1 was one of 22 concept tanks at the QuestionMark III conference.   The "TV" suffix denotes a tank (T) that would require a very (V) long development period, i.e., more than five years.   The TV-1 weighed about 70 tons, measured 11' 10" high and 24' 7" long (not counting the gun barrel), and carried a 105mm gun firing T140E rounds.   It had a 14 inches armor on the front of the hull and the turret and 3 inches armor on the sides, carried 110 rounds of ammunition, and had a 440 volt AC generator and motor drive for its transmission.   And it was powered by a nuclear reactor.   Here's a picture of the mockup: 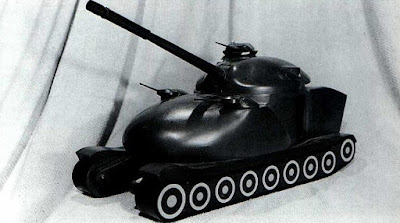 The only description of the reactor is that it's a "gas turbine, open air cycle" reactor, and can run for 500 hours at full load without refueling.   From the description and the diagram, it sounds like what they had in mind was a smaller version of the direct-cycle nuclear turbojets that GE was developing at this time for the Aircraft Nuclear Propulsion program.   Basically, air is pumped into your nuclear reactor to cool it, and the hot air then drives a turbine.   The engine is shown as being right under the crew compartment in the turret in this diagram: 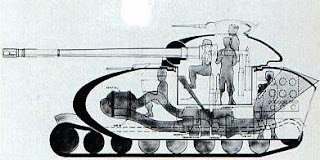 Here's a closeup of the engine: 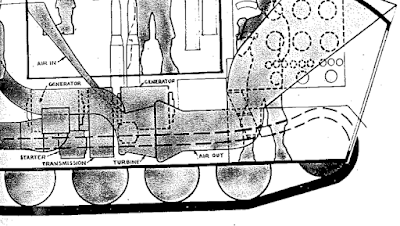 For limitations, they include:
Unfortunately, that's basically it.   There's very little description of this beyond the picture of the model, the schematic, and some bullet points.

Besides the TV-1, the conference also features the following: 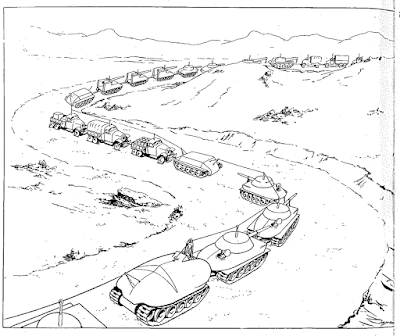 I'm going to just quote the accompanying text in its entirety:


Detroit Arsenal feels that the Army must find some way to make use of the tremendous potential of Nuclear Power in combat.

The picture shows one of many ways we can conceive of using this power.   In this case we show a single power source for a convoy supplying power to Tractors for each serial.   Quick disconnects would permit immediate release for operation as individual vehicles when a given phase line or boundary is crossed.   Another use might be similar to that of current electric buses attached to overhead wires, possibly no more difficult to install than fuel pipe lines.   Following the approach of the picture again, a Trackless Train for communications zone use is possible.

Regardless of whether any of the above ideas are useful or not, all agencies should be considering and suggesting means of using this potential. [QM3]


This is at least a marginally better idea than the TV-1, but only marginally.

I suspect part of what's going on here is something that we saw with the atomic-powered train, as well.   That is, I suspect that this is a nuclear-powered tank being designed by tank engineers, without the input of nuclear engineers, who would have told them how bad an idea this was.   In particular, though I can't put numbers on this, I doubt intensely that the thing could have even moved, given the weight of the shielding it would need to keep from frying its crew.   There's also the issue of the reactor leaking if the Soviets start shooting at it.   This was the 1950s, when everyone expected a land war in Europe to involve lots of tactical nukes, so maybe they thought that no one would notice a little more fallout?